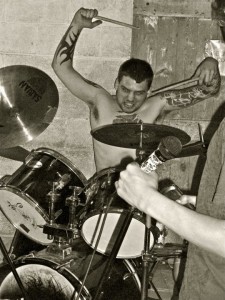 Following an open and shut trial, inmate 29799 was deemed a menace to society and a national security risk. Locked away on 113 counts of assault, 43 counts of lewd conduct, 23 counts of treason, 22 counts of arson, not including evidence found in a raid of his secluded cabin after the trial. Upon integration into a secret government containment facility, within a week 30 of the other inmates had mysteriously disappeared, and 12 had been inducted into psychiatric care claiming they had seen a demon crawling out of inmate 29799’s cell and inside of other inmates. 29799 was placed into solitary confinement, but the disappearances did not stop. Three days later 29799 had somehow escaped his cell. Rumors say he made his way to Ohio to meet with the other demons of his brood, and to this day they use their musical instruments to separate people from their souls allowing demons to enter their bodies and do the bidding of the Revenant.